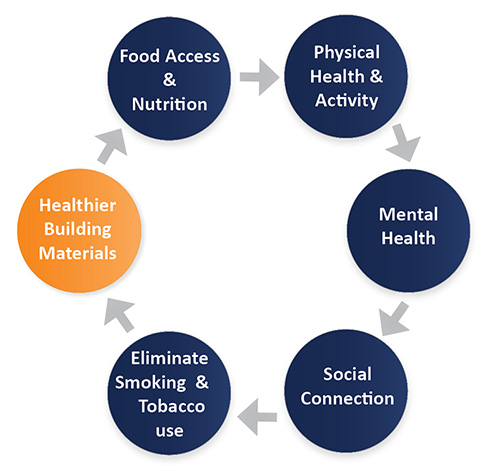 What do you think of when you hear the term “healthy living?” A balanced diet? Physical activity? What about healthy building materials? The concept of healthy living can — and should — be extended to include anything that can affect people’s health either directly or indirectly. With this in mind, the impacts of building materials on occupants’ health is a growing concern of building industry professionals because exposure to unhealthy chemicals used in building materials can trigger serious health hazards.

END_OF_DOCUMENT_TOKEN_TO_BE_REPLACED

Katie negotiating a curb ramp and crosswalk with the aid of a cane while wearing vision-altering goggles.

Last month, I had the opportunity to attend a training session entitled “Shifting Your Perspective: Experience and Plan for Accessibility Challenges,” which was hosted by the Dutchess County Planning Federation. The course syllabus was broken down into two components: experiential and site planning. The goal of the experiential portion of the course was to provide attendees with a variety of simulated sensory and ambulatory challenges and have them navigate the built environment. While the course was primarily geared toward local municipal planning boards, there were valuable lessons to take with me, both in my role as an Accessibility Specialist and as a county resident interested in learning first-hand the challenges that people with disabilities face every day.

END_OF_DOCUMENT_TOKEN_TO_BE_REPLACED

This image depicts the prescriptive Accessible Design requirements for light switches and operable parts under the Fair Housing Act. Unlike Universal Design, Accessible Design is not intended to be flexible, with little or no room for tolerance.

END_OF_DOCUMENT_TOKEN_TO_BE_REPLACED

The GR-5: Winning Prototype from Marymount University’s 2017 Strong by Design-athon.

Every April during National Fair Housing Month, those of us on SWA’s Accessibility Team like to partake in activities that remind us why accessible design is so important – both in housing and otherwise. This year, I had the exciting opportunity to be part of a guest jury for a design competition with Marymount University in Arlington, Virginia. The fourth annual Strong by Design-athon is a project exhibition that aims to raise awareness about the needs of veterans with disabilities and inspire the design, technology, and healthcare communities to embrace Universal Design.
END_OF_DOCUMENT_TOKEN_TO_BE_REPLACED